Popular Worldwide
London’s New Year’s Day Parade now regularly attracts a worldwide TV audience of approaching three hundred million, a terrific audience on the streets of London every New Year’s Day of two thirds of a million, and boasts twice as many participants every year as a little Parade offered by Macy’s in New York City on Thanksgiving Day! ‘London’s New Year’s Day Parade’ is now a very major entry in the United Kingdom’s calendar of events. It is good for London, and it is enjoyed by millions of people worldwide. 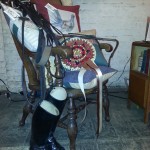 UK Rosettes Well, this is an adventure! We started rosette making back in 2008, now we do bespoke requests for customers all over the world. From sponsoring showing world sashes for three years, to a letter from Buckingham Palace, with a British Trade Association member which means so much to me